Morse is a Malamute that appears now and then in Balto. He is a sled dog.

Morse is a dark brownish gray Malamute. He has a lighter face and underbelly, and a darker patch on his back.

Morse first appears when Jenna is with the others in the Gold Dredger. Jenna tells them that Balto is tracking the lost team, and Morse laughs at the fact that a mutt is trying to track a championship team in a blizzard. The other dogs join him, and Jenna narrows her eyes.

Steele arrives, and they're all shocked to see him. Morse asks where he's been and if he's okay, but Steele doesn't respond and begins eating a bone. Morse looks sad and shocked as Steele tells his story.

"That mutt? Tracking a championship team in a blizzard?"

"Steele! Where've you been? Are you okay?"

-Morse to Steele when he returns in Balto 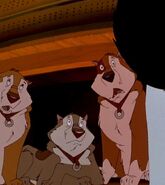 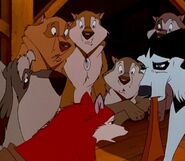 Add a photo to this gallery

Retrieved from "https://baltotrilogy.fandom.com/wiki/Morse_(Malamute)?oldid=20099"
Community content is available under CC-BY-SA unless otherwise noted.